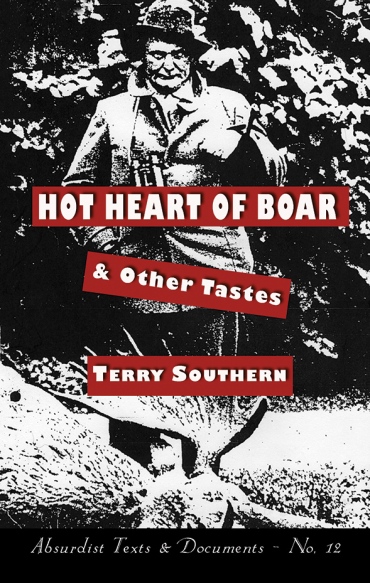 Fresh from the oven comes HOT HEART OF BOAR—piping hot and throbbing—in a limited edition of 125 copies. The collection features rare, unpublished texts, including an excerpt from The Hunters of Karinhall—a bloody brilliant uproduced screenplay (emphasis on “bloody”). There’s also a private letter to William Burroughs; a vomiting priest; “K.Y. Madness,” and more. In addition to the author’s culinary delights, you’ll find illuminating introductory notes by Nile Southern, as well as tastefully explicit illustrations by Norman Conquest.

In short, it’s is a full-boar feast for famished fans of black humor.

On Monday 25 March, 7 pm. at McNally-Jackson, 52 Prince Street, between Lafayette and Mulberry Streets, Richard Kostelanetz will present over one dozen recent books rarely, if ever, seen before, most of them extending his earlier achievements at the intersection of literature and book-art, many of them produced with the seductive new technology of “on-demand printing” and thus reasonably priced, at least for now.

Among them are Epiphanies, two vols., 1000 pages, one story to a book page, culminating thirty years of work with resonant single-sentence climax moments in otherwise nonexistent fictions, a typographical feast for a monumental project, 8½” x 11”.

Conceptual Fictions, an extended essay with examples about the framing of implicit narratives.

Visual Fictions, collecting pages designed more than a decade ago for hisOpenings and Complete Stories, along with his Leonardo and Me.

Vocal Shorts, an expanded edition of his texts designed for live performance for various numbers of players.

Openings Short Fictions, in the tradition of Epiphanies, the initial sentences of otherwise nonexistent stories.

Reflections on Loving and Relationships, his aphorisms continuously on right-hand pages against drawings of men and women made by the prominent choreographer Frances Alenikoff.

Furtherest Fictions, which reprints, revised, an earlier collection of his exploration of radically alternative narrative well beyond what every other fictioner is doing.

A Universe of Sentences, a continuous selection of lines by others worth remembering, the whole representing a universe of experience.

1001 Stories Enumerated, single-sentence fictions that, unlike Openings andEpiphanies, are meant to be complete in themselves.

Fields/Arenas/Pitches/Turfs, which completes the publication of geometric poems—with four, eight, and sixteen words to a large book page–begun thirty years ago.

1-99: A Book, another Kostelanetz narrative, in the tradition of Exhaustive Parallel Intervals (1979), composed only of numerals.

Ghostories, which are fictions created by boldfacing certain letters within a single word (e.g., address).

Homophones: Stories, where narratives are composed from two or sometimes more words that sound alike if spelled differently.

To & Fro &, where the reader’s discovery of narratives depend upon turning the book’s pages.

Ops & Clos, where opening and closings words, each pair with its own typography, are interspersed amidst each other.

English, Really English, in which he collects English words that seem incredible—over five thousand of them alphabetically in several perfectbound volumes.

What I Didn’t Do, which epitomizes intellectual nonhistory as Kostelanetz’s record of proposals that were never supported.

A Book of Eyes, photocopied and velobound, which explores the richly various ways that the single letter between H and J appears in contemporary typography

His presentation may also include such slightly older books as Skeptical Essays (Autonomedia), his latest collection of mostly severe criticism; Three Poems (NY Quarterly), where his experiments with three strains of one-word poetry appear interspersed; Micro Fictions (Archae), a limited-edition hardback with 900 pages of Louis Bury’s imaginatively designed narratives all three words and less; the reprint of his classic anthology of alternative expositions, Essaying Essays (AC Books); and maybe some others.

In May, Black Scat will publish Richard’s new book The Works & Life of Kosty Richards: An American Career in our Absurdist Texts & Documents series (#15)—thus adding to this vast library of experimental fiction.

Mausoleum
Hard floor-covering made of ground cork and linseed oil on a canvas backing, found in many large, imposing tombs throughout Asia Minor

Maximum
A full-time working mother with a large family

Mazurka
A lively dance through a confusing, intricate network of pathways bordered with neatly kept topiary

Melancholia
A tonic made from cantaloupes prescribed to relieve extreme depression

Mercantile
A lizard-like reptilian found in many polluted waters

Metallurgy
A hypersensitivity to specific alloys such as brass or bronze

Metaphor
An imaginary apparatus for conveying objects and concepts which do not literally denote, in order to suggest comparison with another object or concept by means of mental signals, as a bright idea, the radiance of which may be changed

Methanation
An aggregation of Methodist persons of the same ethnic family, often speaking the same language or cognate languages

___
from The Complete Unabridged Lexicon by Opal Louis Nations

Alain Arias-Misson reading from his new collection The Man Who Walked On Air & Other Tales of Innocence at the White Box (NYC) on Saturday night. If you missed the event, don’t miss the book. You can order it on Amazon.

Literary legends Yuriy Tarnawsky (left) and Alain Arias-Misson at the Emily Harris Gallery reception last night. It was a glittering & festive evening marking Alain’s return visit to the Big Apple for a series of readings & performances (see previous post here). He holds in his hand a spanking new copy of his fiction collection, THE MAN WHO WALKED ON AIR & OTHER TALES OF INNOCENCE, published by Black Scat Books. 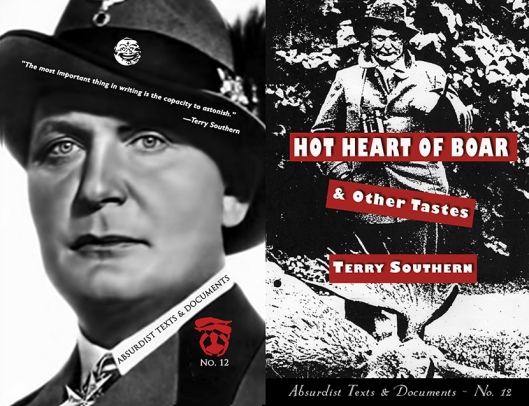 A yummy treat (for those with strong stomachs) is coming soon in our Absurdist Texts & Documents series…a new collection of strange  “tastes” from the late master chef Terry Southern:

HOT HEART OF BOAR & Other Tastes

We’ll be serving it fresh—piping hot and throbbing—in a limited edition of only 125 copies. First come, first served.

The book features rare unpublished texts, including an excerpt from The Hunters of Karinhall—a screenplay that, sadly, was never filmed. It’s a bloody masterpiece, and we do mean bloody. There’s also a private letter to William Burroughs; a vomiting priest; “K.Y. Madness,” and more.

In short, it’s a full-boar feast for famished fans of black humor.

Prepare to dig in.

Considerations on the Death and Burial of Tristan Tzara by Isidore Isou,  (translated by Doug Skinner) was on display recently in London at an exhibition of DADA, LETTRISM, FLUXUS, FUTURISM, SOUND & CONCRETE POETRY, curated by Frédéric Acquaviva. Alas, we were not there for the festivities, but hear that the book was quite popular with attendees.

There are only a few copies remaining in Scat’s limited edition, so if you haven’t nabbed one  … now’s the time. CLICK HERE

"A novella for our times, the author illuminates a world of uncertainty, misfortune, and absurdity with astonishing accuracy, simultaneously crafting a powerful and compelling story infused with hope and humor in his signature style." —Adrienne Auvray